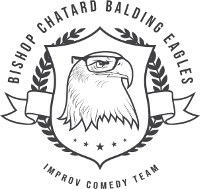 Bishop Chatard’s award-winning Improv Team, ‘Balding Eagles’, is one of the most popular extracurricular organizations at Bishop Chatard.

Students have a great time while learning important life skills! Besides teaching teamwork and having fun, improvisation develops performance skills that can carry over in many life situations: listening, observing, being in the moment and thinking on your feet.

An Inside Look at the Sport

The BCHS Improv team begins preparation for its season towards the end of October. Workshops introduce improv to students new to the sport. Tryouts for the team are held shortly after. Practices then start, consisting of warm ups, exercises highlighting important roles to comedy, and practice games that will be played at matches.

More is required to be a part of the Improv Comedy team than meets the eye. “We are looking for rule followers, not just people who are considered funny,” said Balding Eagles head coach Mr. Tyler Mayer. Members try to follow the basic “Tina Fey rules of improv” which consists of agreeing to your partner in a scene and also adding onto a scene.

Inter-school matches can begin in January and run through April. Match comedy is for everyone and therefore must be appropriate. Inappropriate lines can be penalized by the match referee with a brown bag foul, causing the player to wear a brown bag over his/her head for the remainder of the scene. Puns that cause the audience to groan may result in a loss of points for the team. unless the player declares a heartfelt apology to the audience. Energy is also a key part to improv.

The goal of a match is to make the audience laugh since they determine the winner based on reactions, enthusiasm and applause. 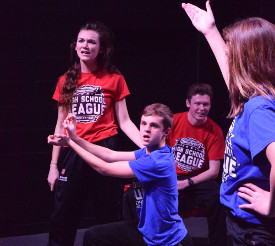 Bishop Chatard’s Vice President of Institutional Advancement, Tyler Mayer, coaches the Improv Team. If you would like to know more, contact him at tmayer@bishopchatard.org.

RT @BCHS_Principal BCHS personalized brick pavers are customized to include engraved name, grad year, and icons commemorating a student's involvement during his/her time at BCHS. All orders received by May 15 will be engraved/returned in time for the traditional Senior Send-Off in early August!

Today is National School Principals Day! @BishopChatardHS is blessed to have Mr. Joe Hansen, a dedicated, engaging principal, at the helm each day whether the learning is occurring on campus or in virtual classrooms. Thank you, Mr. Hansen! @BCHS_Principal @DeaconRWagner

Join @BishopChatardHS at 11 a.m. today (4-30) for BCHS Mass live-streamed from St. Pius X. Music teacher Mark Duray and his family will be providing the music for this Mass! To view the live-stream, go to: facebook.com/spxparishindy/